10,000-seat Mohegan Sun Arena also recently ranked #3 in the world for its size 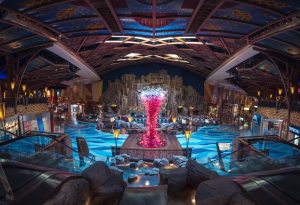 UNCASVILLE, CT (July 25, 2017) – Mohegan Sun is excited to have been named the #1 Casino in the U.S. as part of USA Today’s 10Best Readers’ Choice Awards. Mohegan Sun was voted the #2 casino in the U.S. in the same contest in 2015. Winners were announced this past Friday.

“This was a strong list of destinations that were nominated for best casino in the U.S. and even stronger list that were voted into the top 10. We’re honored to have topped that list; it’s a testament to our whole team and how driven we are to provide the best possible entertainment and gaming attraction we can” – said Ray Pineault, President and General Manager of Mohegan Sun.
Mohegan Sun’s award-winning entertainment venue, Mohegan Sun Arena, was also ranked #3 in this summer’s 15th Anniversary issue of one of the leading entertainment trade publications, Venues Today. This is a worldwide ranking for venues of 5,001 – 10,000, from July 2002 through June 2017.

ABOUT 10BEST.COM:
10Best.com provides users with original, unbiased, and experiential travel content of top attractions, things to see and do, and restaurants for top destinations in the U.S. and around the world. The core of the site’s uniqueness is its team of local travel experts: a well-traveled and well-educated group who are not only experts in their fields – and their cities – but discriminating in their tastes. These local experts live in the city they write about so the content is constantly updated. 10Best.com averages 5 million visitors per month. It was acquired by USA TODAY in January of 2013.

ABOUT MOHEGAN SUN:
Owned by the Mohegan Gaming & Entertainment, Mohegan Sun is one of the largest, most spectacular entertainment, gaming, dining and shopping destinations in the United States.  Situated on 185 acres along the Thames River in scenic southeastern Connecticut, Mohegan Sun is home to three unique casinos, 1,600 deluxe hotel rooms, 2 world-class spas, a golf course, over 90 shops, restaurants and bars as well as three award-winning entertainment venues including a 10,000-seat Arena. Mohegan Sun is within easy access of New York, Boston, Hartford and Providence and located 15 minutes from the museums, antique shops and waterfront of Mystic Country. More information is available by calling 1.888.226.7711 or visiting mohegansun.com. Connect with us on Facebook, follow us on Twitter and Instagram @mohegansun, view us on YouTube and find us on Snapchat at username MoheganSun.