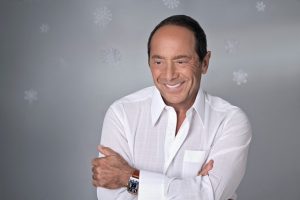 Tickets are $49.00, $39.00 and $29.00 and go on sale Friday, August 25th at 10:00am through Ticketmaster.  Ticketmaster customers may log on to ticketmaster.com or call Ticketmaster’s national toll free Charge By Phone number 1.800.745.3000.  Tickets will also be available at the Mohegan Sun Box Office beginning on Saturday, August 26th, subject to availability.
Paul Anka has sold over 90 million sales worldwide and his songs have been performed over 100 million times, some of which include “Put Your Head On My Shoulder,” “Lonely Boy,” “Diana” and “You’re Having My Baby”.
Anka’s New York Times Bestselling autobiography came out in April 2013, published by S. Martin’s Press, entitled “My Way.” During the same time, his new 14-song album entitled Duets was released by Sony Music Entertainment and featured artists such as Frank Sinatra, Michael Jackson, Tom Jones, Celine Dion and Michael Bublé. Duets provides a musical journey through the life and times of Paul Anka and includes heartfelt liner notes written by Anka himself as an introduction to the  classic songs he and his collaborators have chosen. Duets set a milestone in Billboard Chart history because with the CD, Anka became the only artist to have a CD on the Billboard Top 100 Chart for seven consecutive decades.
In 2014, Anka saw the release of a song he co-wrote with Michael Jackson entitled, “Love Never Felt So Good” off of Jackson’s album Xscape. As lead song off of Jackson’s CD and it’s first single, it has received massive radio, sales and critical success and reached #1 in over 50 countries.
Mohegan Sun Arena is now ranked consistently among the top venues in the world according to Billboard Magazine, Pollstar and Venues Today. It has won “Casino of The Year” at the Country Music Awards in 2008 & 2010 and in 2013, was voted “Arena Of The Year” at the G2E Global Gaming Conference in Las Vegas.  Mohegan Sun Arena was also ranked among the top 10 arena venues in the nation for 2014, regardless of size. In 2015, Mohegan Sun took home the IEBA award for “Casino of the Year.”  Mohegan Sun also won “Casino of the Year” in 2 categories at the 2013 & 2016 Academy of Country Music Awards. For more information on concerts and other great events, visit Mohegan Sun. For information on this week’s schedule, call the Entertainment and Special Events hotline at 1.888.226.7711, ext. 27163.