UNCASVILLE, CT (June 25, 2018) – Barrett-Jackson, The World’s Greatest Collector Car Auctions®, delivered another incredible record-breaking automotive celebration during its 3rd Annual Northeast Auction, June 20-23, 2018, at Mohegan Sun in Connecticut.  During the four-day event, 662 vehicles crossed the block with a 99.25 percent sell through rate, selling for more than $24.9 million, while 457 pieces of automobilia brought in over $832,000. Barrett-Jackson also fueled support for charity by raising $1.245 million from the sale of five vehicles, including the historic sale of Dodge’s last production 2017 Viper and 2018 Challenger SRT Demon for $1 million. In total, Barrett-Jackson set a Northeast Auction sales record, reaching nearly $27 million in total sales.

Celebrities, including actor and pro wrestler Bill Goldberg, NBA star Ray Allen, NFL player Barkevious Mingo and comedian Jeff Ross were on-site to join in the high-octane auction action. Barrett-Jackson’s Super Saturday was full of adrenaline-filled fun and included a stop from goldRush Rally as they kicked off their 10th Anniversary Rally, which will stop in 10 cities over 10 days across the United States. The rally is comprised of some of the most passionate auto enthusiasts driving the most spectacular supercars on the planet, and this was the first time in goldRush’s history that the rally stopped at a collector car auction during their epic drives.

“Once again the energy and passion at our Northeast Auction has been incredible to experience this past week,” said Craig Jackson, chairman and CEO of Barrett-Jackson. “We kicked off the event in a big way on Family Value Day with the historic unveil of the last production 2018 Dodge Challenger SRT Demon (Lot #3002.1) in Mohegan Sun’s spectacular new Expo Center. The next three days continued to ramp up with hundreds of collectible vehicles and automobilia pieces, Ride ’N Drives, Thrill Rides and interactive exhibits. We were honored to be the first collector car auction to host the goldRush Rally, and Saturday was also highlighted by the charity sales of the last production Dodge Viper and last Demon, along with a 35th Anniversary Chevrolet Corvette to help support our yearlong Driven Hearts charity initiative. It was truly an electric weekend and we thank all of our guests for making it such a memorable auction.”

The top 10 vehicles sold during the 2018 Barrett-Jackson Northeast Auction included: 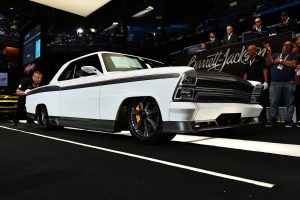 Charity sales took center stage during the Northeast Auction with the sale of five vehicles that raised a total of $1.245 million. Pro wrestler Bill Goldberg was on the block to amp up excitement for the last-production models of the 2018 Dodge Challenger SRT Demon (Lot #3002.1) and 2017 Dodge Viper (Lot #3002). The pair crossed the block on Saturday and together hammered in for $1 million to benefit the United Way. The $100,000 buy fee was donated to Barrett-Jackson’s yearlong Driven Hearts campaign supporting the American Heart Association. On Saturday evening, a ’88 Corvette 35th Anniversary Edition (Lot #3003) sold for $60,000 benefitting the American Heart Association. On Friday, a ’71 Corvette Sting Ray (Lot #3000) sold to benefit The Klingberg Family Centers and a ’70 Chevrolet C10 Pickup (Lot #3001) sold to benefit the American Red Cross.

“It’s rewarding to be a part of the enthusiasm of the automotive community across the Northeast,” said Steve Davis, president of Barrett-Jackson. “We’ve been so blessed to have this community behind us over the last three years, which includes their tremendous support of our charity efforts. With the generous support of our consignors and bidders, we have helped raise nearly $104 million to date for people across the country, from all ages and walks, live healthier and more meaningful lives. We’re so grateful to be a part of the good that comes from helping those in need.”

Automobilia was an integral part of the Barrett-Jackson experience during the 3rd Annual Northeast Auction and set a three-day auction record for total sales, selling 457 pieces that offered something for every type of collector and enthusiast. Automobilia sales soared to over $832,000, with the following top five sales:

About Mohegan Sun: Owned by Mohegan Gaming & Entertainment, Mohegan Sun is one of the largest, most spectacular entertainment, gaming, dining and shopping destinations in the United States.  Situated on 185 acres along the Thames River in scenic southeastern Connecticut, Mohegan Sun is home to three unique casinos, 1,600 deluxe hotel rooms, 2 world-class spas, a golf course, over 90 shops, restaurants and bars as well as three award-winning entertainment venues including a 10,000-seat Arena. Mohegan Sun is within easy access of New York, Boston, Hartford and Providence and located 15 minutes from the museums, antique shops and waterfront of Mystic Country. More information is available by calling 1.888.226.7711 or visiting mohegansun.com. Connect with us on Facebook, follow us on Twitter and Instagram@mohegansun, view us on YouTube and find us on Snapchat at username MoheganSun.