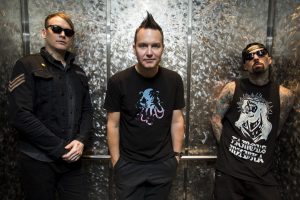 UNCASVILLE, CT (September 6, 2018) – Mohegan Sun Arena regrets to announce that Blink – 182 has cancelled their fall mini tour, which was stopping in Uncasville, CT on Thursday, September 20th.  Medical issues have sidelined drummer Travis Barker per doctors’ orders.  Barker’s medical team anticipated that he would be well enough by fall to tour but after recent checkups they were not able to clear him in time for the scheduled run of dates. Refunds can be received at point of purchase.  All credit card and point transactions will be automatically refunded.

Barker says “The past few months have just sucked as I have been sidelined just waiting for my doctors to clear me so I could get back on the road and perform with my band.  Unfortunately, the risks associated with drumming are still too great.  I am doing everything I need to do so I can get back on the road as soon as possible. I want to thank my fans, family, friends and bandmates for all the love and support.”

About blink-182: Since their humble beginnings twenty – four years ago, when they started playing in a San Diego garage, ‘blink – 182’ has sold over fifty million albums worldwide and rocked audiences from Adelaide to Zurich having become one of the defining rock bands of their generation. They combine high – energy dynamics with an artistic ambition that transcends any genre.  Now with Matt Skiba (of Alkaline Trio) joining ‘blink – 182’ as singer/guitarist, the group starts a new chapter. Skiba debuted with ‘blink – 182’ in March 2015 with a live performance at the MusInk Tattoo and Music Festival: “It was the best they’ve sounded in over a decade,” the OC Weekly raved about the band’s set.