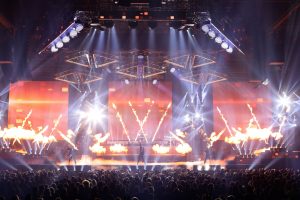 Tickets are $72.50, $62.50 and $43.50 and go on sale Friday, September 14th at 10:00am through Ticketmaster. Ticketmaster customers may log on to Ticketmaster.com or call Ticketmaster’s national toll free Charge By Phone number 1.800.745.3000.  Tickets will also be available at the Mohegan Sun Box Office beginning on Saturday, September 15th, subject to availability.

This year’s tour will include new awe – inspiring effects, as well as amazing staging with an all new design from the dedicated team handpicked by the group’s late creator, Paul O’Neill. The rock opera also features such enduring fan – favorites as “Christmas Eve/Sarajevo 12/24,” “O’ Come All Ye Faithful,” “Good King Joy,” “Christmas Canon,” “Music Box Blues,” “Promises To Keep,” and “This Christmas Day.” Additionally, the tour will enjoy a new second set containing some of TSO’s greatest hits and fan – pleasers.

As in all previous years, a portion of every ticket sold benefits select local charities. To date, more than $15 million has been distributed from TSO to worthy charities all across North America.

On September 28th, Rhino Entertainment will release a 20th Anniversary Edition of The Christmas Attic on CD and digitally. A vinyl version of the release will be available November 23rd. The second installment in The Christmas Trilogy tells the story of a little girl who spends the night in an attic filled with yuletide reveries, while guitar solos and choral vocals soar over a rock orchestral backing across 16 tracks, including a previously unreleased on CD and vinyl version of “Christmas Jam (Live).”