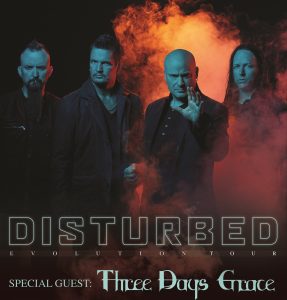 Tickets are $83.50, $63.50 and $43.50 and go on sale Friday, October 26th at 10:00am through Ticketmaster. Ticketmaster customers may log on to Ticketmaster.com or call Ticketmaster’s national toll free Charge By Phone number 1.800.745.3000.  Tickets will also be available at the Mohegan Sun Box Office beginning on Saturday, October 27th, subject to availability.

Disturbed (vocalist David Draiman, guitarist Dan Donegan, drummer Mike Wengren and bassist John Moyer) is one of the most successful Rock bands in modern history. The Evolution World Tour will see the band playing an exhilarating mix of classic hits like “Down With The Sickness,” Inside The Fire” and “The Sound Of Silence” along with new tracks such as “Are You Ready” and the recently released “A Reason To Fight.”

Accomplishing the rare feat of achieving five consecutive number one debuts on the Billboard Top 200. That accolade historically elevated them to rarified air alongside Metallica, the only other Hard Rock group to do so in the history of the chart.  Immortalized (2015) received a platinum certification and spawned the triple – platinum crossover smash “The Sound of Silence,” which garnered a nomination at the 2017 Grammy Awards in the category of “Best Rock Performance.” Since 1996, the band has sold 16 million albums globally and scored twelve No. 1 singles at Active Rock Radio. Their quadruple – platinum 2000 debut, The Sickness, formally announced their arrival as Hard Rock leaders, with that status solidified by subsequent Grammy Award nominations as well as gold, platinum and double platinum certified records, as well as countless sold – out shows around the globe.  Named “Best Rock Artist” during the 2017 iHeartRadioMusic Awards.

Disturbed continues to boldly forge ahead with the release of their aptly titled seventh offering, Evolution, arriving tomorrow. Lead single “Are You Ready,” which hit No. 1 on Billboard’s Hot Mainstream Rock Tracks Chart and has maintained that position for 4 consecutive weeks. The song, which is the band’s 12th No. 1 single and the fastest chart – climber of their career.