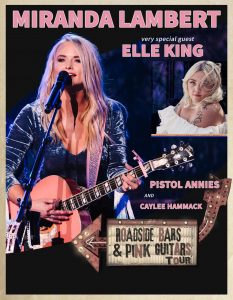 UNCASVILLE, CT (April 22, 2019) – Two-time Grammy award-winner and reigning ACM “Female Vocalist of the Year,” Miranda Lambert, returns to the road this fall on the Roadside Bars & Pink Guitars Tour 2019 – and she’s bringing a heavyweight roster of female powerhouses along for the ride.  The tour launches with back-to-back shows on Friday, September 13th and Saturday, September 14th at Mohegan Sun Arena at 7:00pm with special guests Elle King, Pistol Annies, and Caylee Hammack.

Tickets are $99.00, $79.00 and $59.00 and go on sale Friday, April 26th at 10:00am through Ticketmaster. Ticketmaster customers may log on to Ticketmaster.com. Tickets will also be available at the Mohegan Sun Box Office beginning on Saturday, April 27th at 10:00am, subject to availability.

“I’m so excited and honored to be on tour with some of my favorite artists, who each inspire me in a different way,” shared Lambert of the all-star tour roster. “Elle King is a brave, confident and unapologetic artist who is honest about her life and uses it for her art. My fellow Pistol Annies are not only some of my best friends and writing partners, but also make me want to be a better artist every time we take the stage together. Caylee is a woman who has something to say and does it in her own way. They are the next generation of fearless female artists and I’m so thrilled to share a stage with them.”

Vanner Records/RCA Records Nashville singer/songwriter Miranda Lambert is the reigning ACM “Female Vocalist of the Year,” having been bestowed this honor for nine consecutive years. Her accolades include 2 Grammy awards, 13 (CMA) Country Music Associations Awards, and 32 (ACM) Academy of Country Music Awards as well as many other honors, including the prestigious Harmony Award from the Nashville Symphony.

The Texas native released her last record, a double album titled The Weight of These Wings in November 2016 that debuted at #1 on the Billboard Country Albums chart. She touts six studio albums to her repertoire; Kerosene (2005), Crazy Ex-Girlfriend (2007), Revolution (2009), Four The Record (2011) and Platinum (2014), the latter earning Lambert a Grammy award for “Best Country Album,” in addition to her previous Grammy win for “Best Female Country Vocal Performance” in 2010 for “The House That Built Me.”  The first song released from The Weight Of These Wings, “Vice,” received multiple Grammy and ACM Award nominations. Lambert’s next single “Tin Man,” which she debuted at the 52nd ACM Awards, won “Song of the Year” at the 53rd ACM Awards.

Miranda toured extensively in 2018, starting with the Livin’ Like Hippies tour in January and then following it up with The Bandwagon summer tour with Little Big Town. She was also honored by the Country Music Hall of Fame as their “Artist In Residence” performing twice in September.  As if that wasn’t enough, she wrapped the year with releasing another Pistol Annies album Interstate Gospel on November 2nd. She returns to the road this year on the Roadside Bars and Pink Guitars Tour 2019.

Shake The Spirit lead single “Shame” became her fourth radio #1 single and led Elle to become the only act in history to have scored #1 singles on the Adult Pop Songs, Adult Alternative Songs, Alternative Songs and Country Airplay charts.  Visit elleking.com for more.

Combining the talents of acclaimed Country forces of Miranda Lambert (Lone Star Annie), Ashley Monroe (Hippie Annie) and Angaleena Presley (Holler Annie), Pistol Annies deliver a high-spirited take on life the way real people live it. Songwriters/vocalists, the Annie collective allows the women the freedom to explore the genre beyond their individual careers celebrating friendship, the rough patches and girl power. Having recorded with both the Chieftains and Jewel, their music has also been featured on The Hunger Games: Songs from District 12 and Beyond. They have released three albums, 2011’s gold-certified Hell on Heels, which produced the platinum single “Hell On Heels,” 2013 Annie Up which highlights their single “Hush Hush,” and in 2018 Interstate Gospel.

Caylee Hammack recently highlighted as one of 2019 artists to watch by outlets such as The Bobby Bones Show and HITS Magazine and with over two million streams just weeks after introducing the song to fans, Hammack is quickly becoming one of Nashville’s most buzz-worthy new artists among fans, radio and critics who have already applauded her as “a dynamic singer and equally memorable songwriter, Hammack’s soulful vocals and descriptive lyrics shine on her debut single” (Billboard).  Her self-penned and self-produced songs tug on her own life story, as she invariably turns the lemons of her daring life into sonic lemonade. For additional information, visit cayleehammack.com