Due to an unforeseen scheduling conflict, Straight No Chaser moved their Friday, December 20th show at Mohegan Sun Arena to Monday, December 23rd. All tickets purchased for the original date will be honored on December 23rd. More information about the show can be found at sncmusic.com.

“The Open Bar Tour” stops by the Arena December 23rd 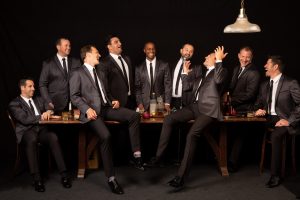 UNCASVILLE, CT (May 2, 2019) – Beloved a capella group Straight No Chaser returns to Mohegan Sun Arena just in time for the holiday season with “The Open Bar Tour” on Monday, December 23rd at 8:00pm.

Tickets are $30.00 and go on sale Friday, May 10th at 10:00am through Ticketmaster. Ticketmaster customers may log on to ticketmaster.com. Tickets will also be available at the Mohegan Sun Box Office beginning on Saturday, May 11th at 10:00am, subject to availability.

Straight No Chaser’s latest studio album, ONE SHOT sees SNC doing what they do best with distinctive takes on classic Pop and Soul favorites, including Ricky Martin’s “Livin La Vida Loca,” Fleetwood Mac’s “Go Your Own Way,” James Brown’s “Papa’s Got a Brand New Bag,” and the LP’s first single, an energetic mash-up of Boyz II Men and Montell Jordan entitled “Motownphilly/This Is How We Do It.” The track is joined by an official lyric video, streaming now at the official SNC YouTube channel.

ONE SHOT is further highlighted by a richly harmonized version of Simon & Garfunkel’s “Homeward Bound” in which the hard-touring group expresses their deep yearning for the comforts of family life. In addition, the LP features alongside seven entertaining conversational interludes wherein the nine members of Straight No Chaser trace their unlikely rise from an undergraduate singing group at Indiana University to a beloved Atlantic Records act with a devoted international fanbase.