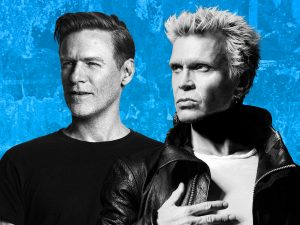 Tickets are $69.00, $49.00, and $39.00 and on sale Friday, May 3rd at 10:00am through Ticketmaster at ticketmaster.com. Tickets will also be available at the Mohegan Sun Box Office beginning Saturday, May 4th at 10:00am, subject to availability. Citi is the official presale credit card of the tour. As such, Citi cardmembers will have access to purchase presale tickets beginning Wednesday, May 1st at 10:00am local time until Thursday, May 2nd at 10:00pm local time through Citi Entertainment. For complete presale details visit citientertainment.com. Tickets for Adam’s solo dates are on sale now.

The tour will mark the first time ever the two indelible musicians have played together on the same stage. Between both of them, they have sold over 100 million records and sold out thousands of shows around the world. With Idol having eight top 20 hits and Adams’ having 13 himself, fans can expect one memorable night of incredible music spanning both artists’ careers.

Billy Idol was an early architect of the sound, style, and fury of Punk Rock. His lip- curling sneer and fist-pumping persona vaulted him into the mainstream as one of MTV’s first megastars, making him one of the most recognizable faces in Pop music. He has sold 40 million albums while scoring numerous platinum albums worldwide, nine top 40 singles in the U.S. and 10 in the U.K., including “Dancing With Myself, “White Wedding,” “Rebel Yell,” “Mony Mony,” “Eyes Without A Face,” “Flesh For Fantasy,” and “Cradle Of Love.” Billy was responsible for some of Punk Rock’s most memorable, literate, and evocative moments and created a pioneering new sound by bringing the spirit of ’77 to the dance floor, going on to fashion an immediately identifiable musical blueprint that integrates club-land throb, rockabilly desperation, and Rock’n’Roll decadence.

Billy Idol, together with his band featuring his longtime guitarist Steve Stevens, has performed at marquee music festivals and has sold out concert tours around the world for the past 37 years.

ABOUT BRYAN ADAMS
One of the most highly acclaimed singer/songwriters, Bryan Adams is known for hit singles “(Everything I Do) I Do It For You,” “Summer Of ’69,” and his Rod Stewart and Sting collaboration “All for Love.” The Grammy winning artist has seen success from a string of #1 in over 40 countries and has sold an excess of 65 million records worldwide. His thirst for performing and unique take on live concerts have established him as one of the world’s best Rock singers of our time.

Bryan Adams is a Companion of the Order of Canada, has been inducted into the Canadian Music Hall of Fame and Canada’s Walk of Fame and the recipient of numerous Juno Awards, three Academy Awards and five Golden Globe nominations, a Grammy Award, American Music Awards and ASCAP Film and Television Music Awards.