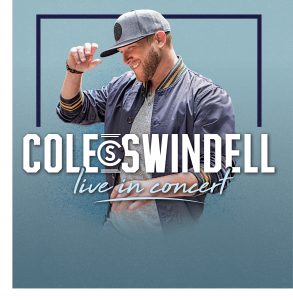 Warner Bros. Records/Warner Music Nashville released his third album, All of It, debuting at #1 on the Billboard Country album chart and #7 on the Billboard Top 200. The first single “Break Up In The End” became his eighth #1 career single as a solo artist. “Break Up In The End” is nominated for CMT “Music Video of the Year” and CMT “Male Video of the Year” and was nominated for a Grammy for “Best Country Song” and was named one of the “best country songs of 2018” by Amazon, Spotify, Billboard, and You Tube among others. Swindell performed the hit single on last summer’s (2018) ABC Television special CMA Fest and when he headlined the NBC’s Citi Concert Series on TODAY (2018).  The Georgia native debuted his current single “Love You Too Late” Live on ABC’s Dancing With the Stars and in December performed it on Jimmy Kimmel Live! The song is included on YouTube’s Best Country Songs of 2018.