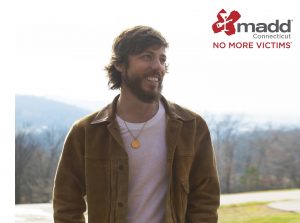 IN DETAIL: Taking over the Wolf Den, MADD About Chris Janson, will be the featured entertainment for the 11th annual MADD benefit.  Longtime supporter and radio host, Shelly Martinez of WCTY – FM, will also be on – hand to give a special message before the concert. Festivities will include a silent auction at The Shops at Mohegan Sun starting at Noon to 10:00pm.

Wolf Den performances are free and open to the public. Must be 21 years of age to enter the Wolf Den. Lines form early and seats are given on a first – come, first – serve basis until we are at full capacity. Limited seating available.

ABOUT CHRIS JANSON:  Chris Janson is a platinum-selling recording artist, high-octane entertainer, multi-instrumentalist, and award-winning singer/songwriter. Janson’s new song, “Good Vibes,” is the debut single from his forthcoming third studio album. His sophomore album, Everybody, produced his gold-certified second #1 hit single, “Fix A Drink,” the chart-topping follow-up to his #1, double-platinum debut smash “Buy Me A Boat.” His CMA-nominated song, “Drunk Girl,” won a 2019 ACM Award for “Video of The Year,” has been named Music Row’s “Song of the Year,” and was called “the most important song to come out of Nashville in years” (CMT). Janson is the only artist in 2018 who opened the CMA Awards and closed out the ACM Awards, with what Rolling Stone called a “must-see performance.” The Grand Ole Opry member is on the road this summer headlining his “Waitin’ on 5 Tour” including a return to the Ryman Auditorium, and as direct support for Chris Young’s “Raised on Country Tour.”

ABOUT MADD:  The mission of Mothers Against Drunk Driving is to stop drunk driving, to support the victims of this violent crime and to prevent underage drinking. MADD Connecticut is committed to clearly and powerfully advocating for victims of alcohol – related crashes.  MADD delivers quality services to hundreds of families each year at no cost to them, as well as help victims/survivors through the multitude of emotions and criminal proceedings that take place through court accompaniment and by providing grief counseling and support groups.  MADD’s goal is to eliminate drunk driving and educate Connecticut youth about underage drinking. MADD introduces and follows legislation concerning bills to strengthen drunk driving laws.

ABOUT MOHEGAN SUN: Owned by Mohegan Gaming & Entertainment, Mohegan Sun is one of the largest, most spectacular entertainment, gaming, dining and shopping destinations in the United States.  Situated on 185 acres along the Thames River in scenic southeastern Connecticut, Mohegan Sun is home to two unique casinos, 1,600 deluxe hotel rooms, two world-class spas, a golf course, over 80 shops, restaurants and bars as well as three award-winning entertainment venues including a 10,000-seat Arena. Mohegan Sun is within easy access of New York, Boston, Hartford and Providence and located 15 minutes from the museums, antique shops and waterfront of Mystic Country. More information is available by calling 1.888.226.7711 or visiting mohegansun.com. Connect with us on Facebook, follow us on Twitter and Instagram @mohegansun, view us on YouTube and find us on Snapchat at username MoheganSun.