The 2019 Awards were announced today, with Mohegan Sun finishing in the top five for three different casino categories 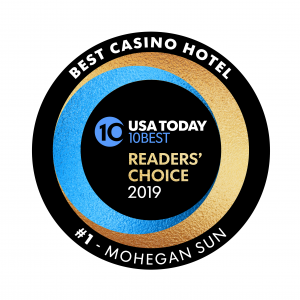 “At Mohegan Sun, we strive for excellence when it comes to guest satisfaction, hotel cleanliness, providing top-notch amenities and staying ahead of the curve throughout all of our incredible offerings, from gaming and entertainment to dining and nightlife, and so much more,” said Mohegan Sun President & General Manager, Ray Pineault. “All three recognitions are truly a testament to the hard work and dedication of our amazing team here in southeastern Connecticut.”

Nominees for USA Today’s 10Best Readers’ Choice Awards were selected by a panel that includes editors from both USA Today & 10Best.com as well as relevant expert contributors. From there, readers voted over the span of four weeks on their top choices. 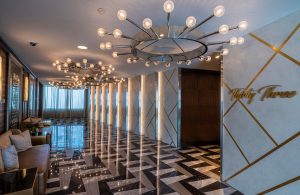 The first place hotel honor arrives on the heels of the recent launch of Aspire, Mohegan Sun’s high-end hotel experience on floors 31-36 of Sky Tower. The luxury upgrade includes private valet and check in, butler service, an in-room gift and access to the all-new luxury food & beverage space, entitled Thirty Three, equipped with blackjack tables, delicious food, flat-screen TVs for the big game and a sprawling view of the New England countryside from the 33rd level of Sky Tower.

Mohegan Sun’s 10,000-seat arena, Mohegan Sun Arena, which is home to both the WNBA’s Connecticut Sun and the National Lacrosse League’s New England Black Wolves, in addition to 100+ concerts yearly, was recently recognized with the “Arena of the Year” award at the 2019 Academy of Country Music Awards. Tom Cantone, Mohegan Gaming & Entertainment’s Senior Vice President of Sports & Entertainment, who oversees Mohegan Sun Arena, was also named to the 2019 VenuesNow inaugural All-Stars list, which recognizes 50 top executives who have made their mark in key areas of the entertainment industry and will continue to shape it in the coming years.

ABOUT 10BEST.COM: 10Best.com provides users with original, unbiased, and experiential travel content of top attractions, things to see and do, and restaurants for top destinations in the U.S. and around the world. The core of the site’s uniqueness is its team of local travel experts: a well-traveled and well-educated group who are not only experts in their fields – and their cities – but discriminating in their tastes. These local experts live in the city they write about so the content is constantly updated. 10Best.com averages 5 million visitors per month. It was acquired by USA TODAY in January of 2013.

ABOUT MOHEGAN SUN:  Owned by Mohegan Gaming & Entertainment, Mohegan Sun is one of the largest, most spectacular entertainment, gaming, dining and shopping destinations in the United States.  Situated on 185 acres along the Thames River in scenic southeastern Connecticut, Mohegan Sun is home to two unique casinos, 1,600 deluxe hotel rooms, two world-class spas, a golf course, over 80 shops, restaurants and bars as well as three award-winning entertainment venues including a 10,000-seat Arena. Mohegan Sun is within easy access of New York, Boston, Hartford and Providence and located 15 minutes from the museums, antique shops and waterfront of Mystic Country. More information is available by calling 1.888.226.7711 or visiting mohegansun.com. Connect with us on Facebook, follow us on Twitter and Instagram @mohegansun, view us on YouTube and find us on Snapchat at username MoheganSun.