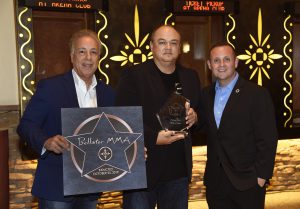 UNCASVILLE, CT (October 25, 2019) — Earlier today, Mohegan Sun honored Bellator MMA with their very own Walk of Fame star outside of the Mohegan Sun Box Office.  The event took place prior to the start of Bellator 231 (Mir vs. Nelson), as Mohegan Gaming & Entertainment’s Sr. VP of Sports & Entertainment, Tom Cantone, presented Bellator President, Scott Coker, with the honor. In accepting the recognition on behalf of Bellator MMA, Coker said, “This is quite an achievement, it’s a milestone for the company, and it all started with Bellator 2 here at Mohegan Sun, and now we’re at Bellator 231& 232. I’ve seen a lot of great fights here and I’m looking forward so many more.”

In introducing Coker, who was joined by MMA legends Royce Gracie & Chael Sonnen, as well as Bellator MMA broadcasters and well-known personalities, Jay Glazer & “Big” John McCarthy, Cantone touched on the impactful 10 year relationship with Bellator in mentioning, “110,000 people later, 20 events later, 500 fights later, we’re here to induct [Bellator MMA]… and It’s the first time that Mohegan Sun has inducted a sports organization, so Bellator has the bragging rights as our first ever sports related Walk of Fame induction!”

Bellator MMA becomes the 34th inductee into the Walk of Fame, where names like Bon Jovi, Kevin Hart, KISS, Kenny Chesney, Keith Urban and so many more long-time sell-out acts are enshrined outside of the Mohegan Sun Box Office forecourt. Owned by media and entertainment giant Viacom, Bellator MMA has hosted over 20 events at Mohegan Sun Arena since their first show on April 10, 2009 at Bellator 2. In that span, there have been incredible moments along the way, including major title-fights, season premieres and highly anticipated matchups in both the heavyweight and welterweight World Grand Prix tournaments.  MMA stars that have fought at Mohegan Sun Arena and for thousands of fans over the years include Michael “Venom” Page, Matt Mitrione, Muhammed “King Mo” Lawal, Alexander  Shlemenko, “Pitbull” Freirree, Brett Cooper, Quinton “Rampage” Jackson and many more.

Mohegan Sun’s Walk of Fame awards seek to recognize individuals and organizations who have made significant contributions to the success of Mohegan Sun as the Northeast’s premier entertainment destination. All of the inductees into the Mohegan Sun Walk of Fame will have their name engraved on a plaque that will be permanently placed at the entrance to Mohegan Sun Arena.