***Please note: this performance has been postponed to Sunday, November 1st. 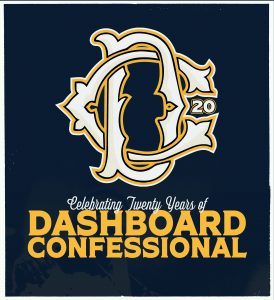 UNCASVILLE, CT (February 3, 2020) – Celebrating 20 years as a band, Dashboard Confessional released on Friday their first-ever career-spanning compilation, The Best Ones Of The Best Ones, featuring selections from all seven studio albums.  As part of their 20th celebration, Dashboard Confessional will perform on Mohegan Sun Arena’s stage Saturday, April 4th at 8:00pm.

In the months leading up to The Best Ones Of The Best Ones, Chris Carrabba (lead singer) has completed an acoustic tour of Europe and the U.K.; filmed an interview and performance for The Ringer ’s Ringer Room series; been featured in New York Magazine’s The Strategist and NYLON , among others; and guested on Damian Abraham’s (of Fucked Up) Turned Out A Punk and Consequence of Sound’s Kyle Meredith With podcasts. Carrabba — who now owns the majority of Dashboard Confessional’s master recordings (a notable rarity in the music industry) — has self-released the physical, double LP version of The Best Ones Of The Best Ones , with distribution via AWAL.

From start to finish, The Best Ones Of The Best Ones showcases the profound durability of Dashboard Confessional’s music over the past two decades. The collection highlights Carrabba’s extraordinary ability to give a cathartic voice to the messiest of emotions, which led the band to ascend from a bedroom project to a global sensation.

With more new music coming soon, Carrabba looks forward to carrying a celebratory spirit all throughout 2020 and reconnecting with his legion of listeners across the globe. “The fact that my music has had an effect on anybody’s life besides mine is so humbling, and one of the greatest parts of that has been getting to know the people who have become fans over the years,” he says. “Because the thing is that people can choose your band, but it doesn’t work the other way around—you don’t get to choose your fans. I always feel so incredibly lucky these are the fans who ended up choosing us.”