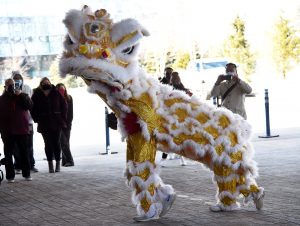 Year every year with a traditional Lion Dance, which has long represented the exorcising of evil spirits and the summoning of luck and fortune. This year, the ceremony took place outdoors at Sky Tower valet, and playing key roles in the celebration were both Mohegan Gaming & Entertainment (MGE) and Mohegan Sun executives. Calvin Chin’s Martial Arts Academy performed the incredible Lion Dance, which culminated with a firecracker display.

The ceremony was more limited than in year’s past to ensure a safe environment.  The outdoor  event was led by VP of Asian and Far East Marketing, Kelly Leung and Director of Asian Communication, Cindy Liu and remarks were also made by both Ray Pineault, Chief Operating Officer (COO) of MGE and Jeff Hamilton, President & General Manager of Mohegan Sun.

“It’s great to still be able to celebrate the Lunar New Year – the Year of the Ox – here at Mohegan Sun today.” –said Jeff Hamilton. “We want to thank all of our friends and partners who are here to celebrate with us and we’re really excited about what next year has in store. We hope it will be very prosperous for Mohegan Sun.”

Part of that excitement for 2021 includes the all-new TAO Asian Bistro, which Hamilton also mentioned in his remarks. This 10,000 square-foot bistro and lounge, located steps from Sky Tower hotel, is planned to open soon.

The ceremony culminated with a spectacular lighting of firecrackers hung outside the entrance of Sky Tower. In traditional Chinese culture, firecrackers were originally used to scare away the evil spirits by its explosive noise.

The Lunar New Year is also being celebrated this weekend throughout Mohegan Sun. Beginning today, the restaurant Phantasia, located in Sunrise Square and inspired by southeast Asian cuisine, celebrates the Lunar New Year with a special menu that will last through Friday, February 26th. Highlights include delicious lobster, fish and fried chicken dishes.  Over at both Jasper White’s Summer Shack and Sushi Koya, a special Red Envelope Giveaway is currently taking place, where the first 200 dine-in guests will receive an envelope with discounts and free items, including appetizers and special entrées.

ABOUT MOHEGAN SUN
Owned by Mohegan Gaming & Entertainment, Mohegan Sun is one of the largest, most spectacular entertainment, gaming, dining and shopping destinations in the United States.  Situated on 185 acres along the Thames River in scenic southeastern Connecticut, Mohegan Sun is home to two unique casinos, 1,600 deluxe hotel rooms, two world-class spas, a golf course, over 80 shops, restaurants and bars as well as three award-winning entertainment venues including a 10,000-seat Arena. Mohegan Sun is within easy access of New York, Boston, Hartford and Providence and located 15 minutes from the museums, antique shops and waterfront of Mystic Country. More information is available by calling 1.888.226.7711 or visiting mohegansun.com. Connect with us on Facebook, follow us on Twitter and Instagram @mohegansun, view us on YouTube and find us on Snapchat at username MoheganSun.