UNCASVILLE, CT (July 21, 2021) – Entertainment is heating up at Mohegan Sun this summer, with incredible stand-up comedy inside Comix Comedy Club, can’t miss tribute bands at the new Party on the Patio event every Friday night and of 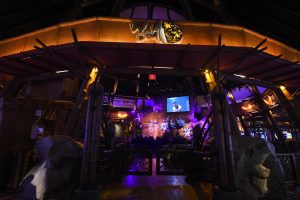 course, the biggest names in music returning to the 10,000-seat Mohegan Sun Arena. Joining the mix of incredible live entertainment throughout the summer will be exciting local bands playing the Wolf Den every week. Hitting the stage in August and September include acts like the Brandt Taylor Band, F & Blues Band, Thirty 6 Red, the ToneShifters, and plenty more!

“Connecticut and our surrounding regions are home to some of the best local bands, bar none, and we’re thrilled to be able to showcase such a tremendous lineup over the next few months,” –said Greg Romeyn, Director of Sports & Entertainment for Mohegan Gaming & Entertainment (MGE) “The entertainment industry felt the challenges of the past 15 months as much as any industry did, and Mohegan Sun wanted to largely dedicate our longest running music venue to one of the most vital segments of this industry: live local music.”

Popular local acts that have recently played the Wolf Den of recent include Branded Country that ROCKS, Wicked Peach, Whiskey Boulevard, Last Licks and more. The action rolls on in early August, when singer, songwriter and incredible guitarist, Brandt Taylor, returns to the Wolf Den stage.

Taylor, who hails from Connecticut and began playing music at the age of nine and professionally by 16, will take the stage with his full band, playing original music. Don’t miss the Brandt Taylor Band at 8:00pm on Thursday, August 5th.

In September, the thrilling group, Souls on Fire, bring their 10-piece horn section and the best music of the 70’s to the Wolf Den stage. Souls on Fire plays the hits form Chicago, Tower of Power, Stevie Wonder, Motown and plenty more. Wolf Den fans can’t go wrong on Thursday, September 2nd for an amazing performance kicking off at 8:00pm.

New London’s own, the ToneShifters, are set for back-to-back Wolf Den shows (8:00pm) beginning Saturday, September 4th. Formed in 2009, the ToneShifters are a Blues / Roots band who have played venues like C.B.G.B’s, Studio 54 and the Hartford Civic Center. Their sound also combines different genres into a cohesive mix of originals and obscure covers. Learn more about the ToneShifters at their Facebook page.

And on Friday, September 17th and Saturday, September 18th, the band Red Light will be performing at 8:00pm in the Wolf Den. Red Light is known throughout New England, bringing classic Dance Party Rock, Country Rock and Pop Rock covers to live music fans. This experienced and dynamic band plays a wide variety of hits, with two highly-skilled guitarists, a monster back beat and multiple part harmonies. Red Light was voted the 2020 Best Musical Group of Eastern CT by The Norwich Bulletin Readers Choice Awards.

The Wolf Den will also still feature some nationally touring headliners throughout the summer as well, including Autograph on Thursday, July 29th, Queensrÿche on Saturday, August 14th and O-Town on Thursday, September 30th.

Guests can stay tuned to mohegansun.com/wolfdenshows for more updates on local acts at Mohegan Sun’s Wolf Den, as more shows will be added through early fall 2021.

*All Wolf Den shows are free and 21+. Lines form early and seats are given on a first-serve basis until full capacity is met.