Celebrate this holiday season with Marie 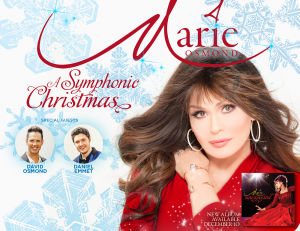 Osmond at Mohegan Sun Arena on Wednesday, December 8th at 8:00pm. Marie Osmond will be joined by special guests David Osmond and Daniel Emmet for this exciting Christmas special.

Tickets are $39.00 & $19.00 and go on sale Friday, September 10th at 10:00am via Ticketmaster.com. Tickets will also be available at the Mohegan Sun Box Office beginning Saturday, September 11th, subject to availability.

Marie Osmond has spent five iconic decades in the entertainment business performing as a successful singer, television performer and talk show host, dancer, actor, author, entrepreneur and public speaker.  She has continued to maintain relevance, remaining an instantly recognizable figure across the globe.

Osmond is a multiple gold and platinum selling artist and Country Music Award winner, garnering numerous Billboard chart-topping singles and albums. Her 2016 album Music is Medicine encompasses a lifetime of experience, music, and joy, and reached top 10 on the Billboard Country list. Her upcoming symphonic album, Unexpected, will be released on Dec. 10 and will cover a multitude of genres like opera, Broadway, and timeless classics.

David Osmond, Marie Osmond’s nephew, has carried on the Osmond entertainer legacy with some incredible milestones of successes and overcoming great challenges. David began performing at four years old, and his solo and group career has included highlights such as tours to sold-out arenas in the U.S., Europe, and Asia, and acts on Broadway.

A shocking multiple sclerosis diagnosis forced David to put his musical career on hold for a short while. His inspiring physical battle to return to the stage has made him an award-winning symbol of hope to the MS community. He continues to inspire as a music artist and motivational speaker.

Daniel Emmet first rose to stardom as a finalist on NBC’s “America’s Got Talent” in 2018. Known for his wide range of expression that spans musical genres from rock and pop to opera, all while singing in seven languages, Emmet has dazzled fans from all over the world with his signature powerhouse vocals and infectious smile. His first single, “Passerà,” debuted at No. 2 on the iTunes Classical Chart. In 2019, Emmet premiered on the Las Vegas strip as a headliner at Caesars Palace for the exclusive run of his show “All That I Am.” He continues to guest star around the country on tour with Marie Osmond, as well as performing solo and symphonic shows.