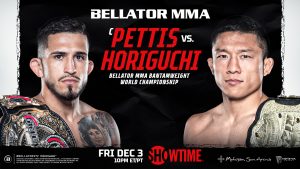 It’s the most wonderful time of the year as Bellator MMA rings in the holiday season with Bellator Bantamweight World Champion Sergio “The Phenom” Pettis (21-5) defending his belt for the first time in an international clash against former Bellator 135-pound titleholder and current RIZIN champion Kyoji “The Typhoon” Horiguchi (29-3) at Bellator MMA 272: Pettis vs. Horiguchi at Mohegan Sun Arena on Friday, December 3rd.

Two additional action-packed preliminary matchups have also been announced with a featherweight feature between Hawaii’s Keoni Diggs (9-1) and John “Platano” de Jesus (14-9), as well as a bantamweight battle between “Gentleman” Josh Hill (20-4) and Jared “Psycho” Scoggins (10-1).

“It’s always a special event when you have a champion versus champion fight,” said BELLATOR President Scott Coker. “I’m excited to have Sergio Pettis and Kyoji Horiguchi competing for the BELLATOR World Championship on Dec. 3. Having a strong working relationship with RIZIN has led to many strong fights between our promotions and I foresee this continuing as we look ahead to 2022.”

Pettis captured the Bellator bantamweight crown this past May at Mohegan Sun Arena by outpointing former champion Juan Archuleta in a fast-paced contest at Bellator 258. The younger brother of former UFC champion Anthony Pettis will make his fourth consecutive Bellator MMA appearance and third straight at Mohegan Sun Arena.

Hailing from Takasaki, Japan, the 31-year-old Horiguchi is the reigning RIZIN bantamweight champion who notoriously became a simultaneous, two-promotion champion in 2019 after taking down and upsetting then-Bellator champion Darrion Caldwell at Madison Square Garden. Unfortunately, an injury would force Horiguchi to relinquish his Bellator title in November 2019. He now looks to reclaim his belt at Bellator 272.

Additional bouts for Bellator MMA 272: Pettis vs. Horiguchi will be announced in the coming weeks.

BELLATOR MMA is a leading global mixed martial arts organization featuring many of the best fighters in the world. Under the direction of veteran fight promoter Scott Coker, BELLATOR events take place in major cities worldwide and can be seen on television in over 160 countries to an available audience of over one billion people. In the United States, BELLATOR can be seen on SHOWTIME. BELLATOR is comprised of an executive team that includes top industry professionals in television production, live event orchestration, fighter development/relations, venue procurement, sponsorship creation/development, international licensing, marketing, advertising, publicity, and commission relations. BELLATOR is based in Hollywood, Calif. and owned by entertainment giant ViacomCBS, home to the world’s premier entertainment brands that connect with audiences through compelling content across television, motion picture, online and mobile platforms.