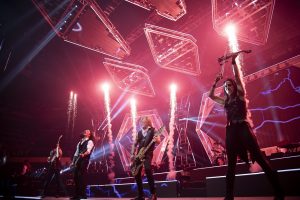 Multi-platinum, progressive Rock group  Trans-Siberian Orchestra (TSO) will bring its highly-anticipated Winter Tour back for 2021 to Mohegan Sun Arena on Sunday, November 28th. In commemoration of the three-time platinum album’s anniversary, TSO will offer concert tickets for $25 for 25 hours only on Thursday, November 4th at 9:00am through Friday, November 5th at 10:00am.

Tickets are available via ticketmaster.com and the Mohegan Sun Box Office, subject to availability.

This year’s long-awaited tour celebrates the 25th anniversary of the group’s landmark album, Christmas Eve and Other Stories, which launched the group to superstardom and spawned the bring-the-whole-family Rock holiday concert tradition that has played to more than 17 million fans nationwide.