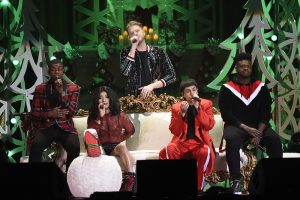 For those who love to blast holiday music as soon as dinner ends on Thanksgiving up until the clock strikes Midnight on New Year’s Eve, live music at Mohegan Sun is the perfect way to celebrate the season.

There’s something magical about taking in a holiday show with family and friends during the most wonderful time of year. Mohegan Sun Arena is hosting six holiday shows throughout November and December. Tickets are available via ticketmaster.com and at the Mohegan Sun Box Office, subject to availability.

But the holiday magic doesn’t stop there! There are several opportunities to enjoy a Christmas show for free at the Wolf Den, located in the center of Casino of the Earth:

Guests may line up no sooner than three hours before a show at the Wolf Den. Seating is on a first-come, first-served basis, however the open venue does allow guests in Casino of the Earth to enjoy the live music while dining or playing games. Guests must be 21 years of age or older to enter the Wolf Den.