Since the launch of 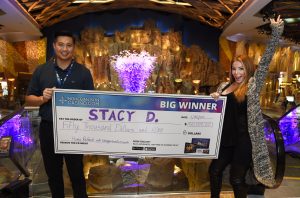 online casino gaming in Connecticut during fall 2021, Mohegan Digital has given away more than $100,000 in cash and prizes, including $75,000 to two lucky winners this week. Just by signing up and creating a new account on the real money online casino app available through CT.MoheganSunCasino.com, Stacy of Milford, CT walked away with $50,000. Another winner, Kelly, from Danbury, CT, was awarded $25,000. Special promotions and giveaways are still taking place for residents and visitors to Connecticut by simply signing up and registering an account at MoheganSunCasino.com or through the associated apps for iOS and Google Play.

Speaking to the excitement of randomly winning $50,000 at a big check moment at Mohegan Sun, Stacy said, “I really couldn’t believe it and asked repeatedly if this was a joke. We love Mohegan Sun and the team there is always so nice, especially the person who called to give me this amazing news!”

MoheganSunCasino.com will also have an exciting promo contest live at the 2022 Sun Wine & Food Festival (SWFF), taking place inside the Earth Expo & Convention Center at Mohegan Sun during the final week of January. “The Temperature Rising Game Show,” located in Earth Expo during the Grand Tasting Preview taking place on Friday, January 28th (8:00pm – 10:00pm), and Grand Tasting (Noon – 5:00pm)  on Saturday, January 29th, will randomly select two contestants chosen from those who have signed up and deposited at least $10 on MoheganSunCasino.com or its apps. The contestants will then battle in a trivia contest against each other, family feud style! Answering five questions correctly in a row will crown a winner, of which up to $2,500 will be awarded. This contest will call up contestants throughout these SWFF events.  “The Temperature Rising Game Show” will also be taking place at the Fire & Ice Festival in Putnam, CT on Saturday, February 12th, from Noon to 9:00pm.

Other thrilling MoheganSunCasino.com promotions are ongoing as well, including another $25,000 being up for grabs as part of the New Year $25k Cheer sweepstakes. All that is required is a download and sign-up through MoheganSunCasino.com and/or its associated apps. This same easy process also gives new users a shot at winning an all-new Xbox Series X or an amazing hotel package that includes overnight accommodations, a $300 Mandara Spa Gift Card, Dinner at Todd English’s Tuscany and more.

Mohegan Gaming & Entertainment (MGE) is a master developer and operator of premier global integrated entertainment resorts, including Mohegan Sun in Uncasville, Connecticut, Inspire in Incheon, South Korea and Niagara Casinos in Niagara, Canada. MGE is owner, developer, and/or manager of integrated entertainment resorts throughout the United States, including Connecticut, New Jersey, Washington, Pennsylvania, as well as Northern Asia and Niagara Falls, Canada, and Las Vegas, Nevada. MGE also manages Mohegan Digital, which is an iGaming division providing cutting-edge online gaming solutions to Mohegan’s loyal fan-base and meeting the needs of new customers on a global scale. Mohegan Digital launched MoheganSunCasino.com and associated smartphone apps in Connecticut on October 19, 2021. MGE is also the owner and operator of Connecticut Sun, a professional basketball team in the WNBA. For more information on MGE and our properties, visit mohegangaming.com.