Year of the Tiger festivities kick off on Sunday, February 6th 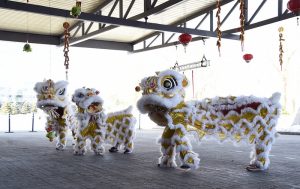 The celebrations kick off with a performance from Jonathan Lee, one of Asia’s most influential and respected musicians, at 1:00am on Sunday, February 6th at Mohegan Sun Arena. Tickets are $268, $218, $168, and $98 and can be purchased at www.iemshowplace.com or by calling 718.888.3113. Lee will later be inducted into Mohegan Sun Arena’s Walk of Fame at Noon on Sunday. Guests and fans can observe the public ceremony near the box office in front of Mohegan Sun Arena.

Festivities continue with a traditional Lion Dance featuring Calvin Chin’s Martial Arts Academy. The Lion Dance has long symbolized the exorcising of evil spirits and summoning luck and fortune. The performance will start at 1:00pm at the Summer Valet with an outdoor performance that culminates with a firework display at approximately 1:30pm. Afterwards, the Lion Dance will travel indoors and make its way through The Shops at Mohegan Sun. The Fortune God will be handing out Red Envelopes, which signify good luck and fortune, to guests while supplies last.

The origins of the Lion Dance are linked closely to the origins of the Lunar New Year celebrations. It is said that in ancient times, a mythological creature known as Nian terrorized China and devoured its people on the eve of the New Year. The only animal that managed to wound this beast was the lion. Thus, as an attempt to frighten the beast, the villagers decided to mimic the lion with lions made of cloth. In accordance with this legend, the dance is believed to usher good fortune, as well as ward off evil spirits. The Lion Dance calls for perfect coordination, elegance and nerves of steel. Two dancers are usually needed to give life to a ‘lion.’ One controls the movements of the head, eyes and mouth; the other acts as the body. The first dancer directs the movements, while the second works in tandem with the first.

ABOUT MOHEGAN SUN: Owned by Mohegan Gaming & Entertainment, Mohegan Sun is one of the largest, most spectacular entertainment, gaming, dining and shopping destinations in the United States.  Situated on 185 acres along the Thames River in scenic southeastern Connecticut, Mohegan Sun is home to two unique casinos, 1,600 deluxe hotel rooms, two world-class spas, a golf course, over 70 shops, restaurants and bars as well as three award-winning entertainment venues including a 10,000-seat Arena. Mohegan Sun is within easy access of New York, Boston, Hartford and Providence and located 15 minutes from the museums, antique shops and waterfront of Mystic Country. More information is available by calling 1.888.226.7711 or visiting mohegansun.com. Connect with us on Facebook, follow us on Twitter and Instagram @mohegansun, view us on YouTube and find us on Snapchat at username MoheganSun.