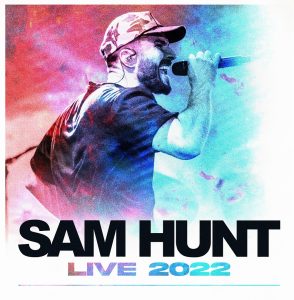 Country superstar Sam Hunt makes his return to Mohegan Sun Arena for one night at 7:30pm on Friday, August 19th.

Multi-Platinum-selling, award-winning hitmaker Sam Hunt’s sophomore album Southside debuted to critical acclaim and was one of the top Country albums of 2020, landing at No. 1 on the Billboard Country Albums chart. Named one of the “Best Albums of the Year” by The New York Times and US Weekly, the Platinum-selling project features 12 songs all written by Hunt, including No. 1 hits “Kinfolks,” “Breaking Up Was Easy in the 90’s,” one of NPR’s Best Songs of 2020, “Hard To Forget,” and his three-week No. 1, eight-time Platinum-selling, Grammy-nominated smash, “Body Like A Back Road.” Hunt’s latest song “23” is playing on Country radio now.

Southside follows Hunt’s Grammy-nominated, triple-Platinum-selling debut album, Montevallo, which also topped the Billboard Country Albums chart and produced four No. 1 singles. All 10 tracks on Montevallo are RIAA-certified with six achieving Platinum or multi-Platinum status including, “Leave the Night On,” “House Party,” “Take Your Time,” “Break Up In A Small Town,” and “Make You Miss Me.”