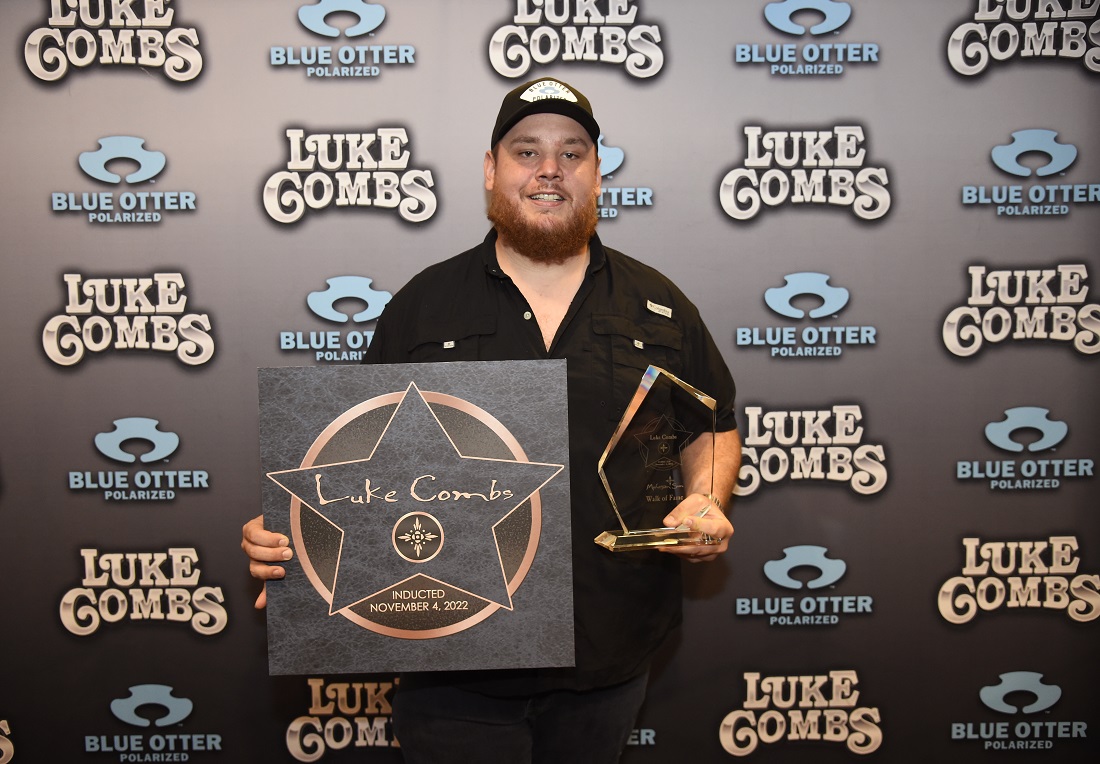 UNCASVILLE, CT (November 8, 2022) – Before back-to-back, sold-out shows at Mohegan Sun Arena this weekend, Luke Combs was inducted into the Mohegan Sun Walk of Fame. Greg Romeyn, Director of Sports and Entertainment for Mohegan, presented Combs with the honor in a private ceremony backstage before Combs’ first show on Friday night. The Country superstar and reigning Country Music Awards “Entertainer of the Year” is the 38th inductee into the Mohegan Sun Walk of Fame.

Combs performed to 9,300 fans on both Friday and Saturday night as part of his The Middle of Somewhere Tour. He has now performed three sold-out shows at Mohegan Sun Arena since making his debut in Uncasville in 2019.

After Combs’ show on Saturday, he made a surprise appearance at novelle’s Luke Combs after party to give away an autographed guitar to one lucky fan. Combs also took the time to sign the iconic autograph wall backstage at Mohegan Sun Arena, which has collected hundreds of autographs from famous performers and entertainers over the years.

A member of the Grand Ole Opry and a six-time CMA, three-time ACM, three-time Billboard Music Award winner, Combs is in the midst of a record-setting and historic series of years. His previous release, What You See Ain’t Always What You Get, debuted at No. 1 on the all-genre Billboard 200 chart as well as Billboard’s Top Country Albums chart. With the record Combs reached No.1 on Rolling Stone’s Top 200 Albums chart, Top 100 Songs chart and Artists 500 chart – the first Country artist to ever lead all three charts in the same week and first to top the Artists 500. He also made history as the first artist ever to have their first two studio albums spend 25 weeks or more at No. 1 on Billboard’s Top Country Albums chart – breaking Taylor Swift’s previously held record at 24 weeks.

The Walk of Fame hosts names like Bon Jovi, Kevin Hart, KISS, Kenny Chesney, Keith Urban and so many more long-time sell-out acts who are enshrined outside of the Mohegan Sun Box Office forecourt. Mohegan Sun’s Walk of Fame awards seek to recognize individuals and organizations who have made significant contributions to the success of Mohegan Sun as the Northeast’s premier entertainment destination. All the inductees into the Mohegan Sun Walk of Fame have their name engraved on a plaque that will be permanently placed at the entrance to Mohegan Sun Arena. Award-winning comedian, actor, producer, and director Chris Rock was most recently inducted into the Walk of Fame in June.

For a full gallery with images from this weekend’s Walk of Fame ceremony, Arena concerts, novelle appearance, and the autograph wall, please visit: https://spaces.hightail.com/space/kN2p3rvfna