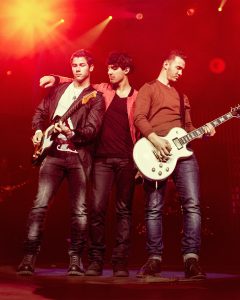 Hot on the heels of sold-out shows at Radio City Music Hall and the Pantages Theatre, and as they come off a hugely successful Latin American run, the Jonas Brothers will embark on their first North American tour in three years this summer as they hit cities across the U.S. and Canada with what will prove to be an epic concert experience for their fans. The band hits Mohegan Sun Arena on July 23rd for a 7:30pm show. This tour announcement comes on the same day the group debuts its new single, “Poms Poms,” a new anthem that redefines their sound with an upbeat mix of Pop and Rock.
Tickets are $59.00 & $49.00 and go on sale Saturday, April 13th through Ticketmaster at 10:00am.  Ticketmaster customers may log on to ticketmaster.com; call Ticketmaster’s national toll free Charge By Phone number 1.800.745.3000; or visit any Ticketmaster outlet.  Tickets will also be available at the Mohegan Sun Box Office starting Sunday, April 14th subject to availability.  More details are available at mohegansun.com/entertainment as well.
“This tour is about re-connecting with our amazing fans who have waited patiently for three years to hear new music from us,” said the Jonas Brothers. “We can’t wait to put on an incredible show for everyone!”
The band, which has previously embarked on eight world and regional tours, performing for over four million fans, recently wrapped a 16-city tour through Latin America and won four awards at the prestigious Viña del Mar International Song Festival, including the festival’s top award.
The Jonas Brothers have sold a combined 20 million units worldwide, earned over 40 Gold and Platinum record certifications. They have won nearly 50 awards across the globe, including an American Music Award.
Mohegan Sun Arena is ranked 3rd in the U.S. and 5th in the world by Billboard Magazine and was the 2008 and 2010 recipient of a Country Music Award for “Casino of The Year.”  Venues Today also ranked Mohegan Sun Arena #4 in 2011 and ranked in the top six of “Top Stops of The Decade” in 2012. For more information on concerts and other great events at Mohegan Sun, visit mohegansun.com. For information on this week’s schedule, call the Entertainment and Special Events hotline at 1.888.226.7711, ext. 27163.