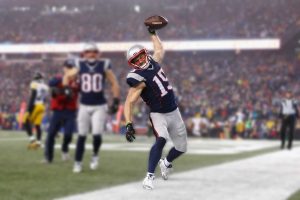 IN DETAIL: You’ve just scored a touchdown – better yet, an exclusive opportunity to get up-close-and-personal with one of football’s finest. Chris Hogan stops by Mohegan Sun on Friday, April 7th to sign autographs for fans, plus signs an honorary contract with the New England Black Wolves to get back to his lacrosse roots, followed by an appearance at the Black Wolves game.

Participation is on a first-come, first-served basis. Chris Hogan will be signing 1 piece of memorabilia OR 1 headshot per person.  Headshots will be distributed at the event. This event is bracelet-only. Bracelets will be distributed at 4:30pm at the signing location. Guests must be wearing a bracelet in order to gain entry into the signing line. Signing personalization and photos are prohibited.