UNCASVILLE, CT (June 2, 2017) – An incredible lineup of classic and late-model Ford Mustangs are making their way to Barrett-Jackson’s 2nd Annual Northeast Auction at Mohegan Sun in Connecticut, June 21-24, 2017. Among the hotly anticipated Mustangs coming to The World’s Greatest Collector Car Auction® is an extremely rare Shelby GT350-H Fastback (Lot #665.1) that is one of 999 Shelby GT350s built in 1966 and a freshly restored ’70 Mustang Boss 429 Fastback (Lot #650). 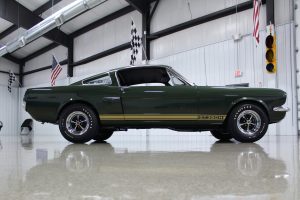 “The Ford Mustang is an iconic American sports car with a rich racing heritage,” said Craig Jackson, chairman and CEO of Barrett-Jackson. “Carroll Shelby helped skyrocket the Mustang’s appeal in 1965 when he introduced the GT350. Today, the popularity of the Mustang continues to be fueled by great drivers like World Champion drifter Vaughn Gittin Jr., and we are excited to have him auction his custom RTR-C. Over the years Barrett-Jackson has sold some of the most high-profile Mustangs, and we look forward to continuing that tradition at Mohegan Sun.”

An extremely rare ’66 Shelby GT350-H Fastback (Lot #665.1) crossing the block at the Northeast Auction is one of only 59 finished in Ivy Green. Fully documented by the SAAC Registry, this Shelby Fastback was completely restored in 2010 and retains almost all of the original sheet metal and framed fiberglass hood. It features a long list of original and correct components, including Ford Carlite glass, Hertz wheels and the restored Cobra Tach. The original matching-numbers Hi-Po 289ci engine was completely rebuilt and documentation includes the SAAC registry book, binder with records, owner’s manuals and Hertz brochure.
With only 10 test miles since its rotisserie restoration, a Grabber Blue ’70 Boss 429 Fastback (Lot #650) features all-original panels and a 375-horsepower 429 Boss engine. It’s equipped with fiberglass belted tires, Drag Pack, convenience group and documentation that includes three copies of Ford Window Stickers and a Deluxe Marti Report.

“Backed by an impressive racing heritage, Mustang remains one of the most sought-after muscle cars on the market,” said Steve Davis, president of Barrett-Jackson. “They’re an excellent car for first-time buyers and seasoned collectors alike. Our Northeast docket will give enthusiasts at every level a chance to own their own piece of American automotive history.”

Mustangs from the ’60s in this year’s premier automotive lifestyle event at Mohegan Sun include a ’67 Custom Fastback (Lot #667). It features a rare Ford 427 FE side-oiler big-block engine connected to a C6 racing transmission and is loaded with high-performance components, including a MagnaFlow exhaust, sway bars and American Racing Shelby Cobra 18-inch rims with Nitto tires. Another ’67 Custom Fastback (Lot #747) started as a coupe and was finished in Pepper Grey Metallic. It comes equipped with unique Shelby badging, GT500 body and rocker striping, 17-inch Shelby-style alloy wheels and a Shelby-style wood steering wheel.

A ’68 Custom Mustang Fastback (Lot #718) started as an original S-Code 390 GT big-block Fastback and was finished in an “Eleanor” body kit. It is a zero-mile restoration muscle car and is powered by a professionally rebuilt 390ci V8 with GT heads, GT exhaust manifolds and GT intake.
The 2017 Northeast Auction Docket is available to view online. Click here to consign a vehicle for the 2nd Annual Barrett-Jackson Northeast Auction or for information on becoming a bidder, follow the link to Barrett-Jackson.com/Bid.

About The Barrett-Jackson Auction Company:
Established in 1971 and headquartered in Scottsdale, Arizona, Barrett-Jackson, The World’s Greatest Collector Car Auctions®, is the leader in collector car and automotive lifestyle events, which include authentic automobilia auctions. The company produces auctions in Scottsdale, Arizona; Palm Beach, Florida; at Mohegan Sun in Connecticut, and Las Vegas, Nevada. With broadcast partners Velocity and Discovery Channel, Barrett-Jackson will feature extensive live television coverage in 2017, including broadcasts in over 100 countries internationally. Barrett-Jackson also endorses a one-of-a-kind collector car insurance for collector vehicles and other valued belongings. For more information about Barrett-Jackson, visit Barrett-Jackson.com or call 480-421-6694.
For high-resolution photos, please contact Aaron Cook at ACook@TPRM.com.

About Mohegan Sun:
Owned by the Mohegan Tribal Gaming Authority, Mohegan Sun is one of the largest, most spectacular entertainment, gaming, dining and shopping destinations in the United States.  Situated on 185 acres along the Thames River in scenic southeastern Connecticut, Mohegan Sun is home to three unique casinos, 1,600 deluxe hotel rooms, 2 world-class spas, a golf course, over 90 shops, restaurants and bars as well as three award-winning entertainment venues including a 10,000-seat Arena. Mohegan Sun is within easy access of New York, Boston, Hartford and Providence and located 15 minutes from the museums, antique shops and waterfront of Mystic Country. More information is available by calling 1.888.226.7711 or visiting mohegansun.com. Connect with us on Facebook, follow us on Twitter and Instagram @mohegansun, view us on YouTube and find us on Snapchat at username MoheganSun.