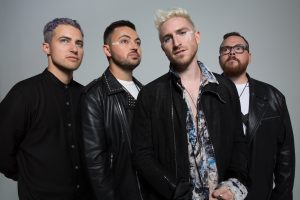 Tickets are $35.00 and $25.00 and go on sale Friday, October 6th at 10:00am through Ticketmaster. Ticketmaster customers may log on to Ticketmaster.com or call Ticketmaster’s national toll free Charge By Phone number 1.800.745.3000.  Tickets will also be available at the Mohegan Sun Box Office beginning on Saturday, October 7th, subject to availability.

Ohio’s WALK THE MOON have been captivating audiences with their energetic live shows for the better part of a decade.  The band first made a name for themselves by touring relentlessly in support of their self-titled debut, which featured the indie classic “Anna Sun.”  The Alt-Rock-Pop quartet were then catapulted into the spotlight when 2014’s “Shut Up and Dance” became a multi-platinum global smash, crossing sonic barriers to top three different Billboard charts.  After two years of performing countless sold out shows in 25 countries across five continents, the band returned to the studio to craft their third major label release, 2017’s What If Nothing. The new album shows the band simultaneously at their most epic and their most vulnerable, a daring step forward both musically and lyrically.

Mohegan Sun Arena is now ranked consistently among the top venues in the world according toBillboard Magazine, Pollstar and Venues Today. It has won “Casino of The Year” at the Country Music Awards in 2008 & 2010 and in 2013, was voted “Arena Of The Year” at the G2E Global Gaming Conference in Las Vegas.  Mohegan Sun Arena was also ranked among the top 10 arena venues in the nation for 2014, regardless of size. In 2015, Mohegan Sun took home the IEBA award for “Casino of the Year.”  Mohegan Sun also won “Casino of the Year” in 2 categories at the 2013 & 2016 Academy of Country Music Awards. For more information on concerts and other great events, visit Mohegan Sun. For information on this week’s schedule, call the Entertainment and Special Events hotline at 1.888.226.7711, ext. 27163.