Performing live in the Arena on December 31st 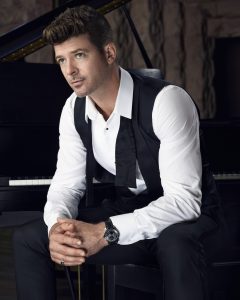 Tickets are $39.00 and go on sale Saturday, October 14th at 10:00am through Ticketmaster. Ticketmaster customers may log on to Ticketmaster.com or call Ticketmaster’s national toll free Charge By Phone number 1.800.745.3000.  Tickets will also be available at the Mohegan Sun Box Office beginning on Sunday, October 15th, subject to availability.

Robin Thicke has established himself as one of the most respected singer-songwriters in Soul and R&B music today. Born in Los Angeles, Thicke taught himself to play piano at the age of 12 and by 16 he was writing and producing songs for top R&B artists. At the age of 21, Thicke had written and produced songs on over 20 gold and platinum albums, including Michael Jackson, Marc Anthony, Pink, Christina Aguilera, Usher, Jennifer Hudson and more. A year later, he signed with Jimmy Iovine and Interscope records. The musician and composer released his critically-acclaimed debut album, A Beautiful World, in 2003 under the name Thicke. The collection was followed by a succession of five critically-acclaimed gold and platinum selling album releases.

Robin’s sixth studio album, Blurred Lines, was released in July 2013. Robin garnered three Grammy nominations and four NAACP Image award nominations. The Blurred Lines album also debuted #1 on Billboard Top 200 while “Blurred Lines” the single continued its 12-week reign on the Billboard Hot 100 chart, making Robin the first artist to take the top spot on both lists since December 2012. “Blurred Lines” scored the highest audience ever recorded and broke records by climbing to #1 on 5 radio charts simultaneously (Top 40, Rhythm, Urban and Hot AC & Urban AC) – the first time this has ever been done by an artist.