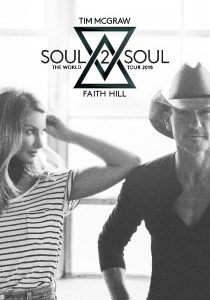 Tickets are $149.00, $99.00 and $79.00 and go on sale Friday, November 17th at 10:00am through Ticketmaster. Ticketmaster customers may log on to Ticketmaster.com or call Ticketmaster’s national toll free Charge By Phone number 1.800.745.3000.  Tickets will also be available at the Mohegan Sun Box Office beginning on Saturday, November 18th, subject to availability.

McGraw and Hill’s first-ever album together The Rest of Our Life will also be released on November 17th on Sony Music Entertainment under the Arista Nashville/McGraw Music imprint. Additionally, later that night the tour film Tim & Faith: Soul2Soul will premiere at 9:00pm on SHOWTIME, on-air, on demand and over the Internet and include live performances from their Soul2Soul tour, as well as unprecedented access to Tim and Faith with never-before-seen interviews and behind-the-scenes footage capturing their unmatched chemistry on and off the stage.

McGraw and Hill are also slated to receive the “Legends of Live” award at the 14th annual Billboard Touring Conference & Awards in Los Angeles on November 14th.