Bringing their “One Shot Tour” on Friday, December 7th 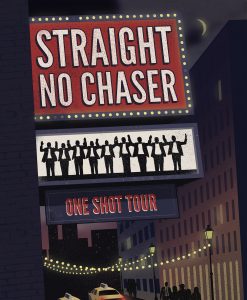 UNCASVILLE, CT (May 8, 2018) – Atlantic Records recording group Straight No Chaser has announced their upcoming “One Shot Tour” with dates in the US and Europe. The North American leg of the “One Shot Tour” will begin on October 26th at the Mystic Lake Showroom in Prior Lake, MN and continues through the holiday season stopping at Mohegan Sun Arena on Friday, December 7th starting at 8:00pm.

Tickets are $30.00 and go on sale Friday, May 11th at 10:00am through Ticketmaster. Ticketmaster customers may log on to Ticketmaster.com or call Ticketmaster’s national toll free Charge By Phone number 1.800.745.3000. Tickets will also be available at the Mohegan Sun Box Office beginning on Saturday, May 12th, subject to availability.

The upcoming tour coincides with the 10th Anniversary of Straight No Chaser signing with Atlantic Records and the release of their RIAA gold certified debut album, “HOLIDAY SPIRITS” after a video of the group performing “12 Days of Christmas” went viral on YouTube and became the most viewed video of 2007.  Upon the release of “HOLIDAY SPIRITS” in 2008, The New York Times predicted” this may be the year’s most unlikely major label story.” Now, 10 years later with six full length albums and four EPs under their belt, the group will hit the road to celebrate and invite fans to join them on the “One Shot Tour.”

Mohegan Sun Arena is now ranked consistently among the top venues in the world according to Billboard Magazine, Pollstar and Venues Today. It has won “Casino of The Year” at the Country Music Awards in 2008 & 2010 and in 2013, was voted “Arena Of The Year” at the G2E Global Gaming Conference in Las Vegas.  Mohegan Sun Arena was also ranked among the top 10 arena venues in the nation for 2014, regardless of size. In 2015, Mohegan Sun took home the IEBA award for “Casino of the Year.”  Mohegan Sun also won “Casino of the Year” in 2 categories at the 2013 & 2016 Academy of Country Music Awards. For more information on concerts and other great events, visit Mohegan Sun. For information on this week’s schedule, call the Entertainment and Special Events hotline at 1.888.226.7711.