Construction has begun on an $80 million Exposition & Convention Center to be located near the Winter Entrance of Mohegan Sun, officials announced at a press gathering Thursday while speaking in detail on the full project; United Natural Foods announced as early partner 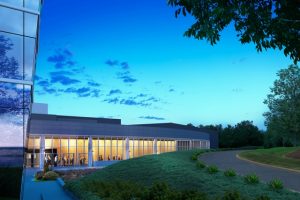 UNCASVILLE, CT (March 23, 2017) – Leaders of the Mohegan Tribe and Mohegan Sun gathered Thursday afternoon at the flagship property in Connecticut, to announce the official plans for The Mohegan Sun Expo Center. Construction is underway with a target opening date of summer 2018. The expansion will span over 240,000 gross square-feet and will be located by the Winter Parking garage and in close proximity to Mohegan Sun’s newest hotel, Earth Tower. The New York based architect firm KPF (Kohn Pedersen Fox) and the construction team out of North Stonington, A/Z Corp, are partners on the project.

The Exposition and Convention Center is expected to attract more corporate and association trade shows, in addition to exhibitions such as Barrett-Jackson and the National Association of Postal Supervisors. It gives Mohegan Sun a great opportunity to also expand current consumer geared shows like Terrificon and bring about tech industry shows, golf shows, musical extravaganzas, home-shows, motor sports and hunting & fishing shows.  One of the first partnerships announced today by Assistant General Manager, Jeff Hamilton, is with United Natural Foods Inc (UNFI), as he eluded to a full-scale food show already in early planning stages for next year.

Mohegan Tribal Chairman, Kevin Brown speaking at the event today as well, touched on more exciting partnerships to come and further positive impacts that the Expo Center will soon have for southeastern Connecticut. “This new conference center will help solidify Mohegan Sun as not just the premier conventions destination, but the premier resort in the Northeast region. It will enable us to host some of the largest trade shows in the nation and take back some of the lost conventions that seek bigger venues in Boston and New York,” the Chairman stated.

The Mohegan Sun Expo Center will bring in an estimated 200 jobs, including construction and permanent roles, with an additional 100 supplier jobs anticipated. Other key details and figures for include:

On the design front, the new Expo Center will be a column-free structure with clerestory windows, offering flexible programming within a naturally-lit space. The main circulation spine that connects the exposition hall to the pre-function area also provides access to the overall facility, including the ballroom and adjustable meeting rooms. Along this path, floor-to-ceiling windows and doors lead visitors onto an outdoor patio that adds gathering space in warm weather and buffers the building from Cove Road that loops around the entire site. Greenery extends east to the recently completed Earth Tower, which shares the same grand entry as the Sky Tower. Interior finishes will recall the Tribe’s cultural history, with custom carpeting and light fixtures that reflect Native American motifs, the nearby Thames River and the color palettes of the Earth and Sky Towers. Additional below-grade entertainment tenant space will comprise of 20,000 square feet of the total expanse, further diversifying the center’s mixed-use program.

Once completed in the summer of 2018, ideally in time for next year’s Barret-Jackson Car Collector’s Auction, Mohegan Sun will be home to the largest meetings and convention spaces between Boston, MA and New York City.
To learn more, visit mohegansun.com/EXPO

ABOUT A/Z CORP: A/Z Corporation is a leading design, construction and maintenance services provider focused on delivering innovative, single-source solutions. The company’s mission is to provide the highest levels of quality and value to the clients it supports in technology-driven industries. This is a commitment that the firm has upheld for nearly 50 years. A/Z’s growing team of 450+ professionals is serving some of the most recognizable private and public companies throughout the Northeast and Mid-Atlantic United States via its offices located throughout the region.

ABOUT MOHEGAN SUN: Owned by the Mohegan Tribal Gaming Authority, Mohegan Sun is one of the largest, most spectacular entertainment, gaming, dining and shopping destinations in the United States.  Situated on 185 acres along the Thames River in scenic southeastern Connecticut, Mohegan Sun is home to three unique casinos, 1,600 deluxe hotel rooms, 2 world-class spas, a golf course, over 80 shops, restaurants and bars as well as three award-winning entertainment venues including a 10,000-seat Arena. Mohegan Sun is within easy access of New York, Boston, Hartford and Providence and located 15 minutes from the museums, antique shops and waterfront of Mystic Country. More information is available by calling 1.888.226.7711 or visiting mohegansun.com. Connect with us on Facebook, follow us on Twitter and Instagram @mohegansun, view us on YouTube and find us on Snapchat at username MoheganSun.