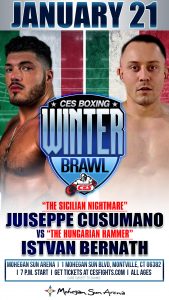 With a new year comes fireworks, and CES Boxing is ready to light up the sky with an epic showcase at one of the world’s premier entertainment venues. Winter Brawl, CES Boxing’s 2023 season opener, comes to Mohegan Sun Arena at 7:00pm on Saturday, January 21st.

Fresh off his knockout win over Dennis Ventura in August at Mohegan Sun Arena, Cusumano (21-4, 19 KOs) returns to face the 6-foot-4 Bernath (10-1, 8 KOs), a two-time silver medalist at the European Union Amateur Boxing Championships. Bernath was born in Budapest and now fights out of Miami.

The 10-round Cusumano-Bernath showdown is one of 11 fights at Winter Brawl, which also features the long-awaited return of light middleweight Chordale Booker (17-1, 7 KOs) from Stamford in an eight-round showcase against 37-fight veteran Angel Hernandez (17-17-3, 11 KOs), plus a highly anticipated six-round interstate battle between Michael Valentin (7-1-1, 1 KO) of Providence, Rhode Island, and the undefeated Kevin Walsh (6-0, 4 KOs) of Brockton, Massachusetts.

Mixed martial arts standout John Gotti III of Oyster Bay, New York, returns to CES for his second professional boxing match. Gotti is no stranger to the limelight; the highly touted MMA welterweight prospect made his professional debut in the cage at CES 46 in Rhode Island in October 2017 and went on to win his first four bouts by first-round knockout. Gotti will take on Alex Citrowske (1-1-1, 1 KO) of Saint Cloud, Minnesota, in a four-round cruiserweight bout.

Returning from a 13-month layoff, featherweight Irvin Gonzalez (15-3, 11 KOs) from Worcester, Massachusetts, steps back into the ring in an eight-round bout against the dangerous Headley Scott (18-1, 12 KOs) of Jonesboro, Georgia. Super featherweight Alejandro Paulino (11-0, 9 KOs), one of the region’s fastest-rising prospects, puts his undefeated record on the line in a six-round bout against Ryizeemmion Ford (8-3, 6 KOs).

CES Boxing is one of the top promotions in the northeast and one of the few to successfully promote both mixed martial arts and professional boxing. Launched in 1992 by longtime boxing judge Jimmy Burchfield Sr., the promotion is the only in professional boxing to boast two reigning WBC Youth world champions in lightweight Jamaine Ortiz and featherweight Irvin Gonzalez. CES Boxing recently teamed with UFC FIGHT PASS, the world’s No. 1 streaming platform for combat sports, to showcase its events to a worldwide audience, and worked as a promotional consultant for the Mike Tyson-Roy Jones Jr. pay-per-view event in November of 2020.