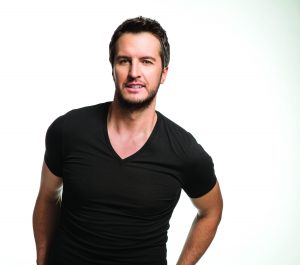 “ACM Entertainer of the Year” Luke Bryan announced today a new headline tour will launch the first of 2014, “That’s My Kind of Night Tour.”  The tour will kick-off its first leg in January16th in Columbus, Ohio and making it way to Mohegan Sun Arena on Thursday, January 23rd for a 7:30pm performance. The huge Country tour will feature Lee Brice and Cole Swindell.
Tickets are $99.50 and $79.50 and go on sale Friday, November 1st at 10:00am through Ticketmaster.  Ticketmaster customers may log on to ticketmaster.com; call Ticketmaster’s national toll free Charge By Phone number 1.800.745.3000; or visit any Ticketmaster outlet.  Tickets will also be available at the Mohegan Sun Box Office starting Saturday, November 2nd, subject to availability.
Luke Bryan is currently nominated for three CMA Awards, “Entertainer of the Year,” “Male Vocalist” and “Musical Event” for “The Only Way I Know” with Jason Aldean and Eric Church. The show will air live on ABC on November 6th from Bridgestone Arena in Nashville, Tenn.  Luke also has two nominations for the upcoming American Music Awards on ABC on Sunday, November 24th – “Favorite Male Artist”- Country and “Favorite Album- Country.”
Luke’s career now boasts over four million in album sales with seven #1 singles.  His recent album, Crash My Party, sold 527,783 units in its first week of release in mid-August, making it the largest sales debut for a Country male artist since 2004.  It also topped both the Billboard 200 and Country sales charts and is the third highest album to debut across all genres this year.  Additionally, Luke is one of only two Country artists that have sold more than a half-million copies of an album in a single week since 2008. This is Bryan’s second consecutive Top 200 #1 album.  Crash My Party has now sold over one million copies and has been certified Platinum by the RIAA.
Mohegan Sun Arena is ranked 3rd in the U.S. and 5th in the world by Billboard Magazine and was the 2008 and 2010 recipient of a Country Music Award for “Casino of The Year.” Venues Today also ranked Mohegan Sun Arena #3 in 2012 and ranked it in the top six of “Top Stops of The Decade” in 2012. Venues Today also named Mohegan Sun Arena #4 in mid-year Top Stops for 2013. For more information on concerts and other great events visit Mohegan Sun. For information on this week’s schedule, call the Entertainment and Special Events hotline at 1.888.226.7711, ext. 27163.