musician Jason Mraz today announced his first US tour dates since the onset of the pandemic.  “Look For The Good Live!” kicks off July 30th at Austin’s legendary Stubb’s Waller Creek Amphitheater and makes its way to Mohegan Sun Arena ... 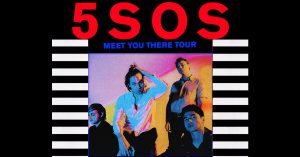 UNCASVILLE, CT (April 9, 2018) – With the spring 5 Seconds Of Summer (5SOS) tour completely sold out, the band is making good on its promise to fans for a more extensive outing, including larger venues and amphitheaters across the run. The Meet You There Tour, produced by Live Nation, will launch on August 27th in Toronto, ON and include a show at Mohegan ...

Don Henley will tour Europe and North America this summer beginning June 20th in Stockholm, Sweden at Ericsson Globe, with dates scheduled through September 21st. Henley will play Mohegan Sun Arena on Saturday, September 17th for a 7:30pm concert. The artist will perform songs spanning his entire career from the Eagles and his vast solo catalog, including songs from his latest release, Cass County.

The Killers are hitting the road this summer for a U.S. tour and will be making their way back to Connecticut for a live performance in Mohegan Sun Arena on Thursday, July 21st at 8:00pm.

As Tom Scholz wrote in the Rock anthem on the BOSTON album Don’t Look Back, "It’s a Party, Party, Party!" Indeed, the 40th anniversary BOSTON tour promises to be a celebration honoring the group’s loyal fans. Many of them have supported BOSTON since 1976 when the debut album, Boston first hit the airwaves and took Rock radio by storm, so it’s not surprising to see concert audiences that span generations. The tour heads to Mohegan Sun Arena for a Thursday, August 11th concert, set for 7:30pm!

After breaking nine attendance records – many his own – and selling in excess of 1.3 million tickets on The Big Revival Tour, Kenny Chesney wanted to harness the energy of last year’s audiences. This 2016 tour is named Spread the Love to reflect the No Shoes Nation’s passion for living life and loving music and Mohegan Sun Arena is primed to host back-to-back shows, beginning with a Friday, May 13th concert beginning at 7:30pm. Chesney will take the stage again the following evening, on Saturday, May 14th. Special guests for both shows will be ACM “Vocal Group of the Year” nominees, Old Dominion.

Halsey’s Madison Square Garden show on August 13th sold out within a matter of days, but the world’s favorite post-apocalyptic Pop disruptor didn’t want to leave anybody out. Announced recently was a full-scale North American headline tour this summer, concluding at the MSG gig. On this run, beginning July 6th in Orlando, FL, her show will transform arenas and amphitheaters into the delightful dystopia depicted within her full-length debut album, BADLANDS (Astralwerks). Mohegan Sun Arena is set to host Halsey for the first time on Thursday, August 4th for a 7:30pm concert.

UNCASVILLE, CT (January 25, 2016) – JOURNEY and SANTANA will join up for three special concerts this April. The two legendary music artists will take the stage together starting in New York City at Madison Square Garden on Wednesday, April 13th with shows also lined up in Uncasville, Connecticut at Mohegan ...

Keith Urban has long been hailed as one of the industry’s best live performerswho has always given his fans, old and new alike, electrifying and unpredictable shows with eye-popping production and a set list that is saturated with many of his 19 #1 songs. Electrifying and emotional, face-paced and inclusive, Urban’s concerts are an explosive experience, a roller coaster ride that numerous critics have called “concert events not to be missed." Mohegan Sun Arena welcomes the tour for a concert on Friday, November 18, 2016.

By popular demand and in addition to the July 1st show, a 2nd Mohegan Sun Arena 5SOS concert has been added for Thursday, June 30th, scheduled for 7:30pm. Produced by Live Nation, this newly added Mohegan Sun Arena show now becomes the kickoff of this highly anticipated “Sounds Live Feels Live” North American tour. Other stops along the way include shows in New York City and Los Angeles.