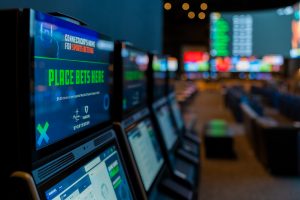 A special parade is also set to kick the festivities off, traveling from Sky Tower hotel lobby to the new sportsbook, beginning at 6:30pm. At 7:00pm, a champagne toast MC’d by Michael Buffer, alongside officials from Mohegan Sun and FanDuel, will take place to officially launch the Mohegan Sun FanDuel Sportsbook, which also just opened a full drink + dining menu and a high stakes Race Book section. Guests will be able to wager on the biggest games that night, as well as enter to win great prizes like a signed Derek Jeter baseball, a signed Aaron Rodgers football and more.

Mohegan Sun FanDuel Sportsbook located in Casino of the Earth

IN DETAIL:  The Mohegan Sun FanDuel Sportsbook is one of the of the largest FanDuel Sportsbook’s in the United States, checking in at 11,000 square-feet and featuring luxury seating for more than 200 people, an incredible 140-foot Hi-Def video wall, six cashier windows and 39 easy-to-use betting kiosks available 24/7 for a variety of sports betting opportunities on all major sports like NCAA Basketball, NBA, MLB, MMA, Boxing, NHL and much more. 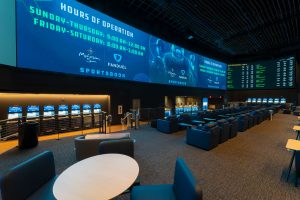 The Grand Opening event on March 5th celebrates the completion of this exciting new sportsbook, which has created 120 new jobs. The Mohegan Sun FanDuel Sportsbook will roll in this new era of casino resort sports betting with the one-and-only, Michael Buffer, alongside a collective of some of the biggest names in sports, past and present.

Guests  21+ can experience the ceremony beginning at 7:00pm and then enter to win prizes that will be given away every 20 minutes through 10:00pm. Prizes include a signed Chris Paul basketball, a signed Derek Jeter baseball, a signed Aaron Rodgers football and more. Additionally, a very special guest is slated to make an appearance just after the festivities begin. DJAE Melee, one of New England’s best, will be spinning throughout the evening.  For more information, click HERE.

*Media interested in a tour of the new Mohegan Sun FanDuel Sportsbook this week for coverage opportunities ahead of this Grand Opening event can reach out to PR Manager, Cody Chapman, at codychapman@mohegansun.com. Credential requests for the Grand Opening on March 5th can also be submitted to Mohegan Sun PR via the above email.