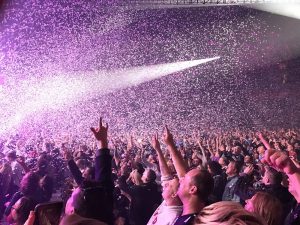 The Academy of Country Music announced the Industry Award and Studio Recording Award winners from the 57th Academy of Country Music Awards at the Grand Ole Opry House Friday night in a special moment. Among the winners, was Mohegan Sun Arena, which ACM named this year’s “Casino of the Year – Arena.” This is the seventh ACM Award for Mohegan Sun Arena, and the 17th national award overall.

All Industry Award, Studio Recording Award, and soon-to-be-announced Special Award recipients will be celebrated during the 15th Academy of Country Music Honors on Wednesday, August 24th at the historic Ryman Auditorium in Nashville.

“We feature so many amazing artists and different genres throughout the year at Mohegan Sun Arena, to the tune of well over 100 concerts per year, but Country music is always so popular here, including some of the biggest A-list acts, many of which started here in the Wolf Den and grew their fan base early in their career throughout New England ” said Tom Cantone, President of Sports & Entertainment for Mohegan Gaming & Entertainment. “To take home our seventh ACM ‘Casino of the Year’ award really is an honor and another credit to our hard-working team at Mohegan Sun and the relationships we have built over the years with the best-of-the-best in Country music.”

The “Casino of the Year – Arena” Industry Award is presented to an outstanding arena within a casino and selected by a professional panel of judges. To be eligible for the award, casino arenas must have bought or promoted at least four Country concerts during the year, be in good standing with all agents, and help promote Country ticket sales.

More information on ticket prices and additional shows can be found at Ticketmaster and Mohegan Sun.