UNCASVILLE, CT (April 27, 2018) – Bon Jovi’s legacy is as much about giving back as it is about epic performances on record setting tours. In 2017, the Grammy-winning global Rock icons and newly announced Rock & Roll Hall of Fame 2018 inductees gave 28 talented acts an opportunity to spotlight their talent to capacity crowds on the This House Is Not For Sale Tour. When the This House Is ...

UNCASVILLE, CT (January 11, 2018) – Global Rock icons and newly announced Rock & Roll Hall of Fame 2018 inductees Bon Jovi have announced the spring leg of their This House Is Not for Sale Tour, presented by Live Nation. The run will kick off in Denver, CO on March 14th, with a stop at Mohegan Sun Arena in ... 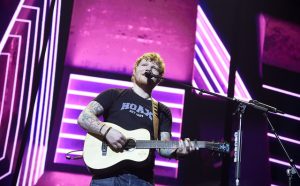 UNCASVILLE, CT (December 11, 2017) – Mohegan Sun Arena recorded yet another successful year of A-list national tours and national awards in 2017. Two major awards were “Prime Site” and “Casino of the Year,” bringing the total to 15 national awards for the Arena over nine years. Named in Connecticut Magazine as “Best of Connecticut 2017” ...

Grammy Award®-winning band, Bon Jovi have announced newly added dates to their This House Is Not for Sale Tour, presented by Live Nation. Fans here in Connecticut will now have the opportunity to witness the chart-topping Rock band live at Mohegan Sun Arena on Saturday, April 1st at 7:30pm.

on May 7th for the fourth and final Uncasville show of the tour. With this concert, the legendary band earns the status of being the highest grossing act ever to perform at the venue. Local rockers Lakshmi, recently chosen as winners of 96.5TIC’s “Wanted… Opening Band For ...

Performing live in the Arena March 26th & 27th
One of the most beloved groups in Rock music, Bon Jovi, will appear live at Mohegan Sun Arena on Friday, March 26th and Saturday, March 27th, with both shows beginning at 8:00pm.
Tickets are $195.00 and $125.00 and go on sale Friday, December 4th at 10:00am through Ticketmaster.  Ticketmaster customers may log on to ticketmaster.com; call Ticketmaster’s national toll free Charge by Phone number 1.800.745.3000.  ...